“Buy land, they’re not making it anymore”.Often attributed to Mark Twain, it’s a quote usually offered as investment advice. You could come up with..

You could come up with something similar for time. Just as there’s only so much land on the Earth’s surface, there’s only 24 hours in a day. Even before COVID, the concept of the attention economy, where publishers of all stripes fight to conquer time in the day, was gaining currency.

In 2022, vaccines will usher more consumers into the pandemic endgame, making that competition even more fierce in what some are labeling an “attention recession”.

With our 360-degree perspective on the consumer, we’re uniquely placed at GWI to track the attention battle during the pandemic so far, and provide insight into where it might head in 2022.

By some measures, the attention recession is already here.

Q2 2020 of our Core research saw an unprecedented spike in virtually all media activities, prompted by widespread lockdowns. This then died back, and we’re now in a kind of interim period where it’s not immediately clear if they’ll return to their previous levels, or reach new heights.

But while time spent is a useful metric, it’s only part of the picture. Without understanding how consumers feel, you’re unlikely to know their next move, the reasons behind it – or what to do about it.

With that in mind, a good place to start is news.

The newsiest event of all time

Rewind back to early 2020. The world is being rocked by a once-in-a-lifetime event.

Information is in high demand and short supply. 35 million viewers break France’s record for the most-viewed TV broadcast ever when they tune into President Macron’s press conferences on COVID-19. The Netherlands and the UK see similar peaks.

As our research showed at the time, news was the media type consumers were most likely to consume more of during the first wave of the pandemic. But after its initial burst, it began to decline. Unlike other media, interest couldn’t stay at those levels. 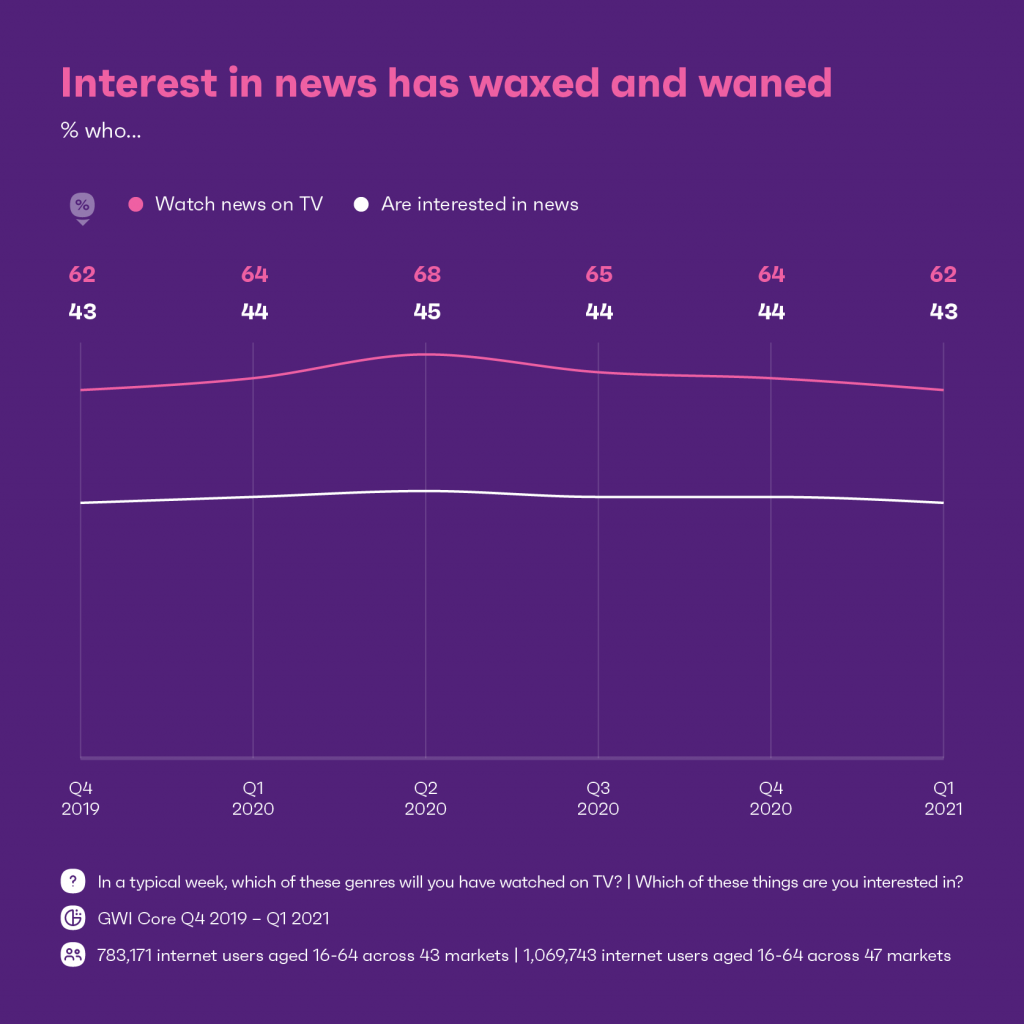 Here’s a very important point to remember: nothing compares with the sheer sense of shock consumers experienced at the beginning of the pandemic. Consumers in the UK have consistently reported less concern about the virus since March 2020 – even when the country was in the grip of a deadlier winter wave, driven by the Alpha variant. The same thing happened in India when Delta emerged – though it remains to be seen if the response to Omicron will follow suit.

The sheer volume of coverage may have actually been detrimental.

Consumers that have switched off news cite too much negativity and too much COVID content as their main reasons for doing so.

News media is also struggling with the historic challenge of persuading people to pay.

A decade ago, consumers were as likely to be paying for digital news each month as they were TV or music. Now, consumers have embraced subscription models for the latter two, but news has barely moved.

The most popular reasons why someone would subscribe are better quality news, exclusives, and in-depth analysis. These seem like obvious points but they point to embracing the fundamentals of good journalism – something made plain in recent rebrands, and arguably the success of certain Substack newsletters too.

News media should also think long-term. Unpredictable, “black swan” events like COVID may appear, but one of the dominating issues for the next 10-20 years is likely to be the climate crisis. Bespoke research we conducted in July 2021 offers some lessons for how to tackle it – all age groups want more positive stories, though there’s a sharp divide between younger readers, who want more global coverage, and older readers, who prefer stories with a local focus.

More positive stories does not mean painting a falsely optimistic picture. Solutions journalism is one way to approach such issues, as it avoids making readers feel powerless and therefore disengaged.

At first glance, COVID has been a boon to TV, particularly the online kind. Minutes watched are up, while watching it was one of the most popular lockdown activities.

But at the same time that eyeballs were going toward The Last Dance and co., other changes in the market were impacting consumers. TV streaming is now a much more crowded space and this is pushing up the cost needed to access the most talked-about shows. 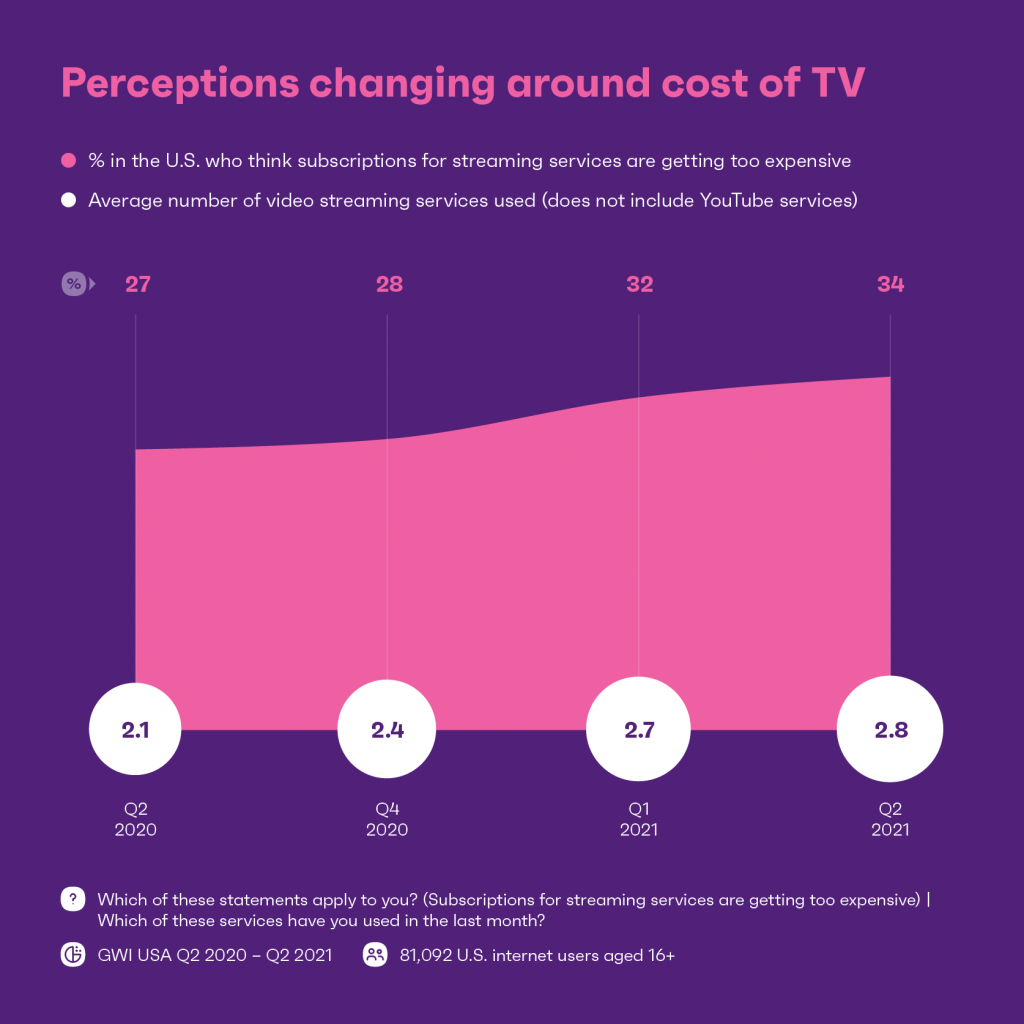 Consumers in the U.S. have grown more optimistic about their finances over the past year, and more willing to splash out too. So the fact that the number who think TV services are too expensive has grown 26%, is pretty telling.

Recent earnings calls show how squeezed the TV market is becoming, but also how unpredictable it can be. Disney’s Q4 2021 earnings showed a slowdown from early success in the pandemic, while Netflix’s outlook was more optimistic, though this was in part due to Squid Game becoming an unexpected hit.

We should consider this in the context of the attention economy as a whole.

The perception of TV becoming more expensive might not just persuade consumers to drop subscriptions, but to spend time with other media instead.

Netflix famously said that it competes more with Fortnite than HBO. And gaming is definitely something that streaming services need to keep an eye on.

If Google Trends is any judge, then the most significant release of the pandemic’s early days was a video game. Animal Crossing saw a higher peak of interest in 2020 than either Tiger King, Tenet, or Taylor Swift’s Folklore – all canonical lockdown releases in their own right. Moreover, while the others had relatively short-lived peaks, Animal Crossing’s decline in popularity came down a more gentle slope.

With gaming, those watercooler moments last longer. Just look at how the Animal Crossing’s November update has led to several pieces about gamers returning to their islands after a long time away.

The fates of gaming and TV are likely to be deeply intertwined. To see this in practice, we can turn to young people in the U.S., where something extraordinary has happened in the past year. 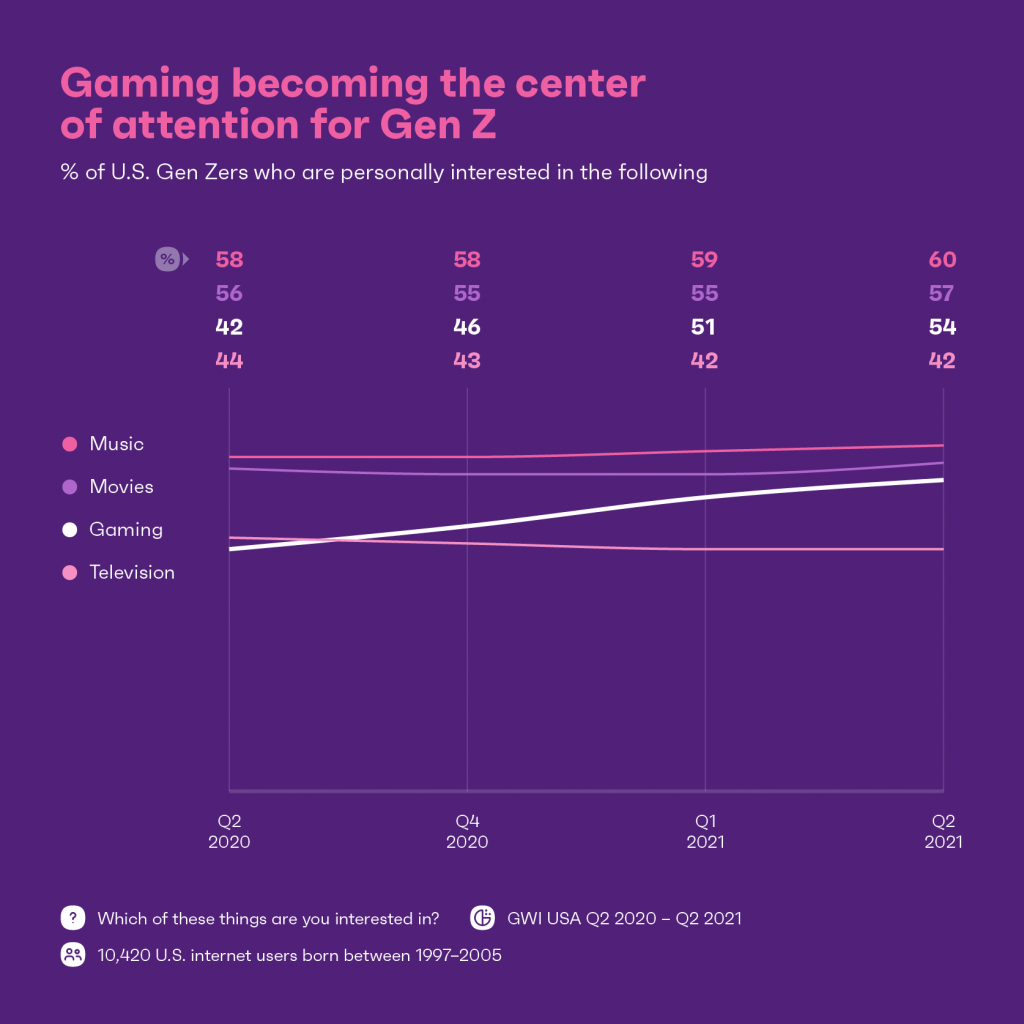 In summer 2020, gaming sat just behind TV in Gen Z’s list of personal interests, and well behind movies and music. Gaming has since drastically overtaken TV, and is now breathing down the neck of both the other two.

For young people, gaming’s increasingly becoming the central medium around which others revolve.

We got confirmation that gaming wasn’t just a lockdown fad with our Q2 2021 release of GWI Gaming. It showed that interest in gaming, and time spent on it, have continued to grow, even with more out-of-home activities available.

We could also peer into something of a crystal ball with data from Israel and the UAE, countries that in the summer of 2021 were among the first to lift restrictions due to the success of their vaccination campaigns.

While local factors come into play, one of the most striking signs was that gaming continued to grow in those countries as a personal interest. Even as lockdowns were eased, it continued to make headway with consumers.

At the time of writing, with workers tentatively returning to offices, it wasn’t hard to find articles recommending podcasts to listen to “when you return to the commute”. 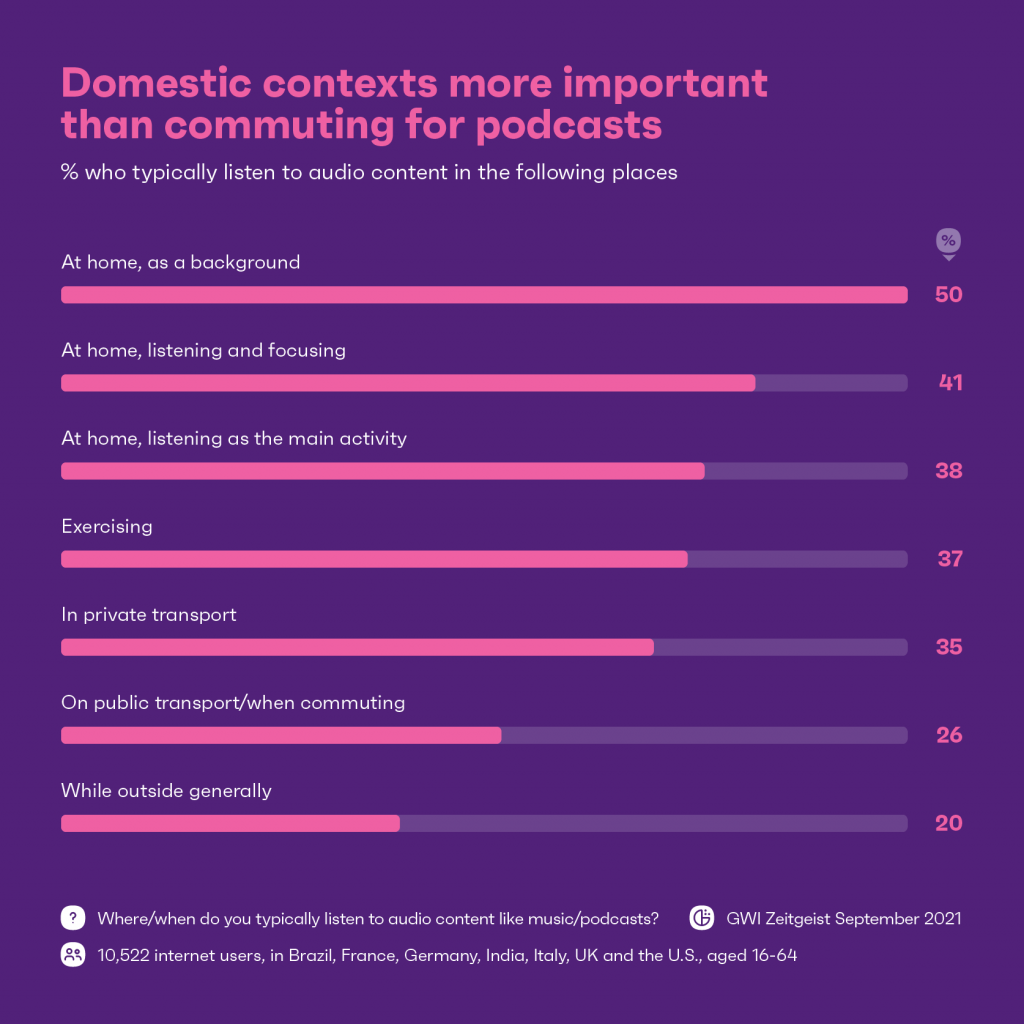 Podcasts have always been linked closely with traveling to work, but that overlooks how much they’re ingrained in domestic environments. Exercise (and likely sleep) are also currently more important contexts for podcast listening than the oft-heralded commute. It’s partly because of this that audio of all kinds has thrived under lockdowns, and will continue to do so.

Based on average time listening per day, music streaming is the only media type to be outperforming its lockdown peak from Q2 2020.

One of the other reasons for audio’s success – and something that may have knock-on effects for other types of media through this attention economy lens – is screen fatigue.

Our GWI Work research allows us to glimpse into what people do in the workplace, in addition to their behavior as consumers. From it, we find that use of video calls exploded in 2020 but then dialed back in 2021 – with screen fatigue the likely culprit.

Little wonder that Google traffic for “eye strain” and “glare” reached all-time highs at the back end of 2020. Here we can also project forward to a world where many work in a more hybrid way, combining office days with WFH days. It may be that issues around looking at different screens in quick succession boost audio media at visual’s expense.

Each media channel faces individual challenges, in addition to the re-appearance of out-of-home activities. But some principles can be applied across the board to retain or win back customers. 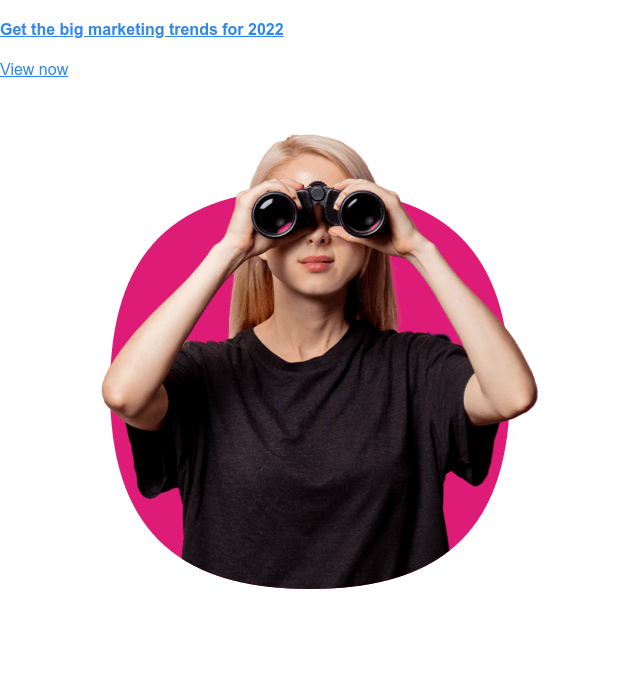