Founded by Guccio Gucci in 1921, Gucci is one of the oldest Italian luxury brands in operation today. Starting out in a small fashion house as a..

Founded by Guccio Gucci in 1921, Gucci is one of the oldest Italian luxury brands in operation today. Starting out in a small fashion house as a luggage manufacturer, producing luxury travel goods primarily for Italy’s wealthier classes, after 100 years’ development, now this brand has become a top-notch global brand and expanded its variety of luxury products into all aspects of life, including leather goods, premium knitwear, silk goods, shoes, and handbags. Known for its extravagant, rebellious, and opulent characteristics, Gucci in China mainly targets the wealthy Gen Z customers who have extra money to splurge and enjoys showing off their prestigious social status.

China, as one of Gucci’s largest markets, has witnessed Gucci’s tremendous expansion since its market entry back in 2006.  Today Gucci owns 40 retail stores in China, has established a strong presence on social media, secured a wide customer base, and ranked up to be among China’s most popular luxury brands, next to Chanel, Dior, and Hermes. Undoubtedly, Gucci’s success story provides a valuable lesson for other brands to emulate. We broke down  Gucci’s strategy in China to understand what drives its excellent performance in the country. 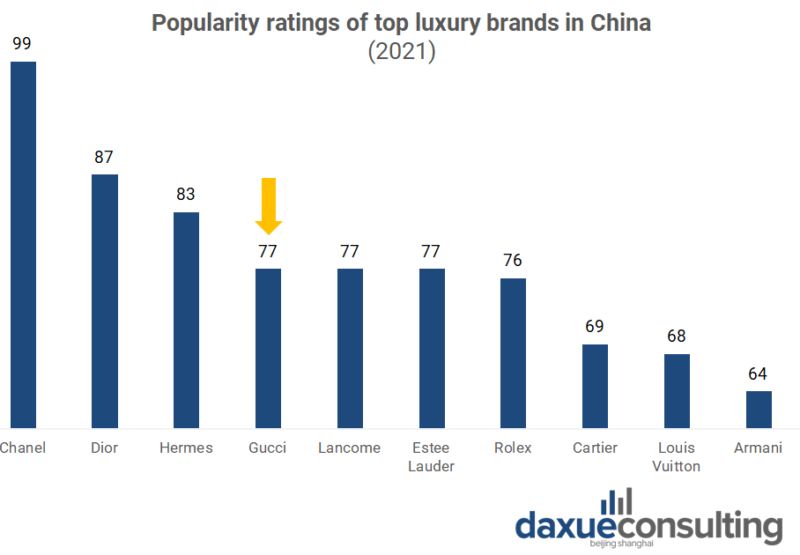 Source: Yahoo Finance and Agility Research, Popularity ratings of the top luxury brands in China, based on a study of 1,000 luxury shoppers in 40 Chinese cities.

Gucci obtains and maintains its star status through the non-stop release of new products, multi-channel marketing, a close monitor on the rapidly changing China market, and constant adoption of innovative advertising strategies. Among this list, Gucci’s three most essential strategies are leveraging WeChat mini-programs, cultural inclusiveness, and collaboration with KOLs.

Aside from establishing the online retail stores like most luxury brands do, Gucci has also launched two interactive WeChat mini-programs (‘Gucci Beauty Self-expression’ and ‘Gift Card’) to provide users with unique experiences and allow Gucci staff to engage with them on a one-to-one basis. This method proves effective to help capture more potential customers and develop brand loyalty.

Gucci Beauty Self-expression mini-program: This is an entertainment-oriented mini-program where users can upload their selfies onto the program page, then they can use the uploaded selfies to produce emojis by blending in customized Gucci-featured icons. This function gives users a moment to immerse themselves in Gucci culture while enjoying this pleasant picture-editing experience.

Gift Card mini-program: The main page of the Gift Card is created in a minimalistic and clean manner, reflecting the elegant style and high-end atmosphere of this brand. Customers are allowed to use this mini-program to purchase gifts for friends, and then they can attach a few sentences of wish on the virtual gift card. Their friends can claim the gift at any retail store of Gucci after receiving the gift card. Everything is done within a few clicks. This approach helps demonstrate Gucci’s cultural value of interpersonal care and also fits in with the shopping habits of modern young people, which is ‘convenient, quick and direct’.

Collaborating with KOLs and celebrities

Collaborating with Key Opinion Leaders, or KOLs, is nowadays a necessary effort for luxury brands to operate profitably in Chinese market, and is also part of Gucci’s strategy in China. On Oct 26th, 2021, Gucci officially announced Xiao Zhan as their new brand ambassador.. Xiao is a member of the Chinese boy group X Nine. He rose to fame in 2019 with his performance in the TV drama ‘The Untamed’, which is now available on Netflix worldwide. After the official announcement, Gucci immediately topped the ranking of most discussed topics on Chinese websites and the sales of its products displayed explosive growth overnight.

It’s undeniable that Xiao Zhan was appointed as the brand ambassador partly owing to his popularity and widely-endorsed Kpop appearance, which features feminine and somewhat cute facial make-up that are in line with Gucci products’ delicate design and androgynous characteristics.

However, according to Gucci’s CEO Marco Bizzarri, the main reason that Xiao was chosen was due to his strong mentality. Xiao was mired in intense cyberbullying in 2019 and disappeared from the public sight for almost one year. However, despite such a tremendous impact on his career and reputation during the low time, he still works hard to pass positive energy to society. It’s his positivity and tenacity that were hugely appreciated by Marco Bizzarri and made him Gucci’s new brand ambassador.

In Gucci’s 2018 official cruise campaign ‘Roman Rhapsody’, Gucci selected an eclectic mix of residents in Rome’s neighborhood as models rather than conventional European beauties, to demonstrate the real Rome society. Among this mix of people, Sonia Zhou, a middle-aged Chinese woman caught attention from Chinese netizens. Sonia is a Chinese immigrant and owner of a popular Chinese restaurant Hangzhou da Sonia. She formed a friendship with Gucci’s creative director Alessandro Michele when Michele dined at her restaurant.

‘Roman Rhapsody’ cruise campaign wasn’t set out to attract Chinese customers but to celebrate non-conforming cultures and eccentricity, which are also Gucci’s core values. However, since it’s not common for foreign high fashion brands to employ an average Chinese woman as a model for campaigns, this very conduct conveys a strong sense of affinity, cultural inclusiveness, and progressiveness. Immediately after Sonia’s debut on this fashion stage, posts titled ‘ Chinese pride on high fashion stage’ and ‘Immigrant restaurant owner made it from Zhejiang to Gucci’ swept Chinese websites. Because of this, Gucci’s products experienced an explosive boost in sales and topped the heated topics on Weibo.

The ongoing pandemic delivers a striking blow to the luxury brands in China, and Gucci is no exception. Strict travel restrictions and recurring lockdown take away customers’ opportunities to purchase luxury goods, together with the additional financial burdens imposed due to reduced salary and negative economic outlook. However, according to Kering’s (Gucci’s parent company) annual financial reports in 2020, Kering’s sales revenues displayed a shockingly 83% increase in Asia-Pacific, compared to a 34% decline in western Europe, and it’s worthwhile to mention that Gucci’s strategy in China is the biggest driver for such an astonishing growth rate.

Gucci puts a heavy focus on online marketing during the pandemic. Beginning in early 2020, Gucci launched official accounts beyond Wechat and Weibo. That included the short video app platform Douyin and the social media/e-commerce platform Little Red Book (小红书). Gucci sought to catch attention and inspire public discussions via curation of social media content. On July 30th 2020, Chinese Valentine’s Day, Gucci launched a virtual campaign, introducing the GG apple collection, which featured the motif made up of two interlocking red letter Gs and was inspired by the phrase ‘you are the apple of my eye’. For Weibo, Gucci posted seven short films with open endings that the audience was invited to participate in finishing. This way of cleverly involving the audience allowed those videos to collect over 1.5 million views. Meanwhile, on Douyin, Gucci posted a series of amusing B-rolls of the short movies, which sparked netizen discussions. For the Little Red Book, Gucci invited the actress to introduce the collection via live stream and post detailed pictures of the product. The hashtag ‘Gucci Qixi’ has reached over 126,000 views on Little Red Book thus far.

See our report on the fashion market in China

This article Gucci’s strategy in China: What has Gucci done right to win China over? is the first one to appear on Daxue Consulting - Market Research China.